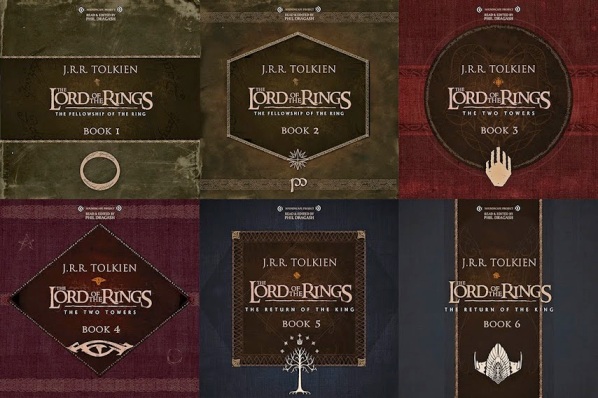 So this isn’t under my usual coverage on Adventures in Middle Earth but I wanted to share it anyway. Phil Dragash is an independent video editor/ artist/ creator who over the last four years has been creating a modern Lord of the Rings audiobook adaptation. The main difference between this and past audio or radio adaptations for me is the use of sound effects and music from the Jackson film trilogy. He has made it as good as many modern audio dramas and better, in my opinion, than the official audiobook read by Rob Inglis, and in some ways better than the BBC Radio Play (though I’m still a fan of Ian Holm’s Frodo). Honestly, in some way Phil’s version of the story surpasses the Jackson films, if only because of its meshing of the sound-scape and overall storytelling style of the films, with the fully unabridged content of the original books.

Phil finished the book last year, but recently he has begun all over again by remastering and re-releasing the book on Youtube. I sincerely recommend you check it out.

Phil Dragash Reads “The Lord of the Rings” – Unabridged Playlist

Shadowfax is a very simple game, so there isn’t a lot to say. You’re playing as Gandalf atop the titular steed Shadowfax, as he rides across fields fighting Nazgul. You can kill the Nazgul by shooting lightning bolts at them. The game’s setting is peculiar, as I initially thought it was covering the early skirmish on the Pelennor Fields before the Siege of Minas Tirith starts, however the Nazgul are all on horses, not the winged fell beasts. So I suppose the game could be set during the unseen period when Gandalf was fleeing from the Nazgul in Eriador while Aragorn is leading the Hobbits to Rivendell. All of this said, the game also features maaany more than nine Ringwraiths, so maybe trying to work out the canon for this unknown Commodore game is a bit ridiculous.

That’s pretty much it, but the reason I wanted to cover this game was to show how epic it is playing this wee game with Howard Shore’s epic score from the Return of the King (Lighting of the Beacons from The Complete Recordings).

Isn’t it glorious? Next up is the 1982 text adventure The Hobbit from Melbourne House.

The Lord of the Rings: Journey to Rivendell
Atari 2600
Parker Brothers
Unreleased (Was announced in 1983)
Prototype discovered 2001-2003

This unreleased Atari 2600 game covers one of my favourite parts of the Lord of the Rings, Frodo’s journey from Hobbiton to Rivendell, during which he gets chased down by Ringwraiths (overkill much, Sauron?), meets several strange men (they spend two whole nights at Tom Bombadils… aren’t they supposed to be in a hurry?), and generally walks around a bit until he gets stabbed on Weathertop. That is the case in the book at least. This game is of course a little simplified, but it actually gets the basics of that story covered.
END_OF_DOCUMENT_TOKEN_TO_BE_REPLACED

Lord of the Rings, and Middle-Earth in general has spawned hundreds, if not thousands, of games. Not only adaptations, but whole genres of gaming owe their existence to the wonderful work of J.R.R. Tolkien. To name a few, Dungeons and Dragons, Ultima, Warhammer, Warcraft, and The Elder Scrolls, all owe the workings of their lore in some way or another, to a creation of Tolkien’s. For example, the whole modern concept of an orc (with that specific spelling) was invented by Tolkien, equating Goblins, which had hitherto been unrelated, the word Goblin being descended, through the German kobold, to the original Greek word κόβαλος (kobalos, meaning rogue or knave), with the then-unused Old English word orke descending from the latin orcus which meant a spectre of some sort. Apart from the mini-language lesson (which is relevant only because of Tolkien’s own love of philology) this goes to show how the inventions of Tolkien had such an impact on fantasy in western culture as a whole, and therefore his impact on fantasy gaming.

What I aim to do in this series of reviews I’m calling Impish Adventures in Middle-Earth (for posterity) is to eventually cover any and all games released that are directly related to Tolkien; that is, any licensed computer or video games based on his books, video game adaptations of the movies, bootleg or amateur games released to capitalize on the release of said movies, and hopefully board, card and tabletop roleplaying games based on the franchise. Tolkien’s legendarium is a mythos of its own, and while I do respect the opinion of those purists who see anything beyond the written word as being a cash-in on the stories, I believe that the depiction of events, locations and characters from any written work, through film or game or other medium, if done well, is in no way disrespectful to the memory of Tolkien himself, and are just like any film or game based on classical myths and legends.

My final essay in MFCO301 ‘Film Theory’ covered the engagement of audiences and how it related to the success of a work, by looking at Fiske’s example of the television muscle drama and the growth of Transmedia produced content in the past ten years.

For my final essay in MFCO312 ‘Communication and the City’ I was to study a city and ask how its composition related to its ability to achieve certain socioeconomic goals, and whether barriers are areas were created to prevent certain populations from achieving these goals. I studied Wellington City, and focused on the clash between members of the creative classes and how they were supported, and the variety of ethnic groups in Wellington and their recognition.

Welcome to Impish Adventures! The homepage of me, Tom Gluck!